The Influence of Federal Spending on Presidential Elections | Andrew Reeves

The Influence of Federal Spending on Presidential Elections 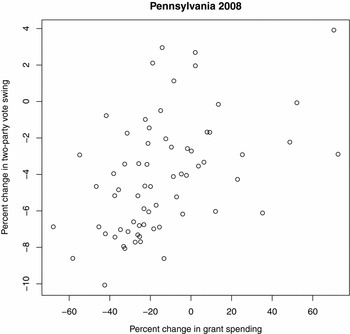 Do voters reward presidents for increased federal spending in their local constituencies? Previous research on the electoral consequences of federal spending has focused almost exclusively on Congress, mostly with null results. However, in a county- and individual-level study of presidential elections from 1988 to 2008, we present evidence that voters reward incumbent presidents (or their party’s nominee) for increased federal spending in their communities. This relationship is stronger in battleground states. Furthermore, we show that federal grants are an electoral currency whose value depends on both the clarity of partisan responsibility for its provision and the characteristics of the recipients. Presidents enjoy increased support from spending in counties represented by co-partisan members of Congress. At the individual level, we also find that ideology conditions the response of constituents to spending; liberal and moderate voters reward presidents for federal spending at higher levels than conservatives. Our results suggest that, although voters may claim to favor deficit reduction, presidents who deliver such benefits are rewarded at the ballot box.